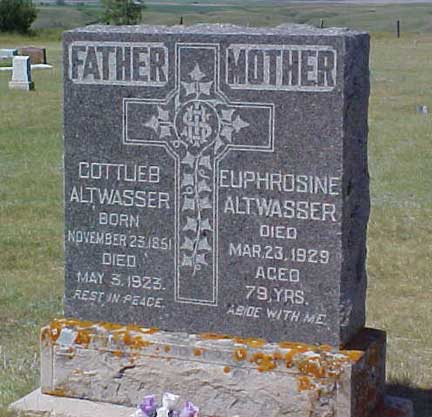 "After Sunday brunch and a visit to the cemetery, we checked out a large buffalo rub and an Indian grave, along with many tent rings along the edge of the mile wide valley carved by the melting waters of the last ice age. 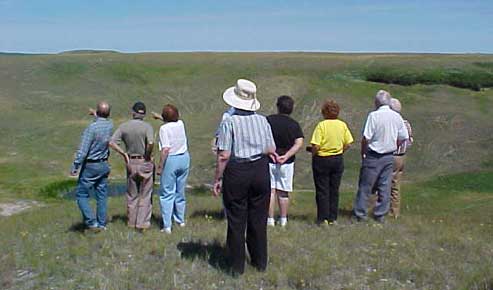 It was the end of a perfect weekend during which we accomplished four things. We got to know some relatives who had never been here before. We paid tribute to our ancestors. We marked the historic trails that were travel routes before roads and we celebrated our century in Western Canada."

As part of the Century Farm celebration, new grave covers for Grandpa Gottlieb and Grandma Euphrosine were ordered and installed. Small brass plaques at the foot of each cover acknowledge and thank direct descendants grand children and great grand children for their financial support of the project.

"I should probably explain why we are meeting in the middle of nowhere on the top of a hill. I have three reasons:

This is the centre of my universe. I was born 1/2 mile north, educated 1/2 mile south and lived here all my life. It is 500 miles to Winnipeg, 500 miles to Calgary, 500 miles to Denver and 500 miles to the Churchill River flowing to Hudson Bay. Closer to home we have Wood Mountain Uplands southwest; Big Muddy Valley southeast; Missouri Coteau to the east and Cypress Hills to the west. The area between is known as the Palliser Triangle or the Old Wives Basin, a watershed noted for low rainfall and prolonged periods of drought causing a shortage of fresh water."

Ten years ago we celebrated 100 years of farming. We also erected an historic marker called "Gottlieb Junction" to mark his homestead at the junction of two trails. The farm land has since been sold, but the ranch land was retained and this year got a new name. It is called Old Water Ranch - Old Wives Basin. Hope Grandpa Altwasser approves.

Have a Merry Christmas.

From Helen and Herb Domes